Welcome to the Law Office of Cathy Higgins-Mora

Concentrating in US Immigration and Nationality Law

Cathy-Higgins Mora is a sole practitioner with an office in her hometown of Wheeling, Illinois. Ms. Higgins-Mora has been practicing exclusively in the area of immigration and nationality matters since early 2000.

We are an immigration law firm that represents clients in US immigration law and nationality matters, with special interest in family based immigration matters and waivers of inadmissibility. We represent people who want to immigrate to (or change their status within) the United States, become US citizens or bring family members or others to the United States. We make sure you understand your rights and that your rights are protected by advocating zealously for you.

Cathy Higgins-Mora provides her clients with a careful analysis of the issues of their case. She provides detailed advice on options and strategies. Ms. Higgins-Mora has successfully represented numerous clients before the U.S. Department of Homeland Security Citizenship and Immigration Services (USCIS), Immigration and Customs Enforcement (ICE) and Customs and Border Protection (CBP). Likewise, she has helped clients navigate matters before the State Department, the Executive Office for Immigration Review (EOIR or the Immigration Court), the Board of Immigration Appeals and the U.S. District Court.

We provide you with honest and efficient legal representation in US immigration and nationality law matters. We understand and keep up with the ever changing immigration laws, regulations and policies. We represent individuals in immigrant and non-immigrant visas, waivers of inadmissibility, and naturalization/citizenship. We counsel you through each step of the process.

We speak English and Spanish fluently. If you’d like to bring an interpreter in any other language, please do so.

Prior to starting her own practice since June 2014, Cathy Higgins-Mora was a partner with Hughes Socol Piers Resnick & Dym, Ltd in Chicago. She has dedicated her career to the practice of U.S. immigration and nationality law. She joined the firm in 2000.

Ms. Higgins-Mora represents individual foreign nationals and their families in U.S. immigration and nationality matters, including family-based immigration petitions and applications; adjustment of status and immigrant visa processing; and naturalization and citizenship applications.

In the 1990’s Ms. Higgins-Mora was an extern at the Midwest Immigrant & Human Rights Center (now the National Immigrant Justice Center), where she was involved in significant lobbying efforts on behalf of individuals being detained indefinitely. She also prepared a manual and trained pro bono attorneys how to represent clients under the Nicaraguan Adjustment and Central American Relief Act of 1997 (“NACARA”).

Cathy is licensed to practice law in the state of Illinois since 1999. Since Immigration law is federal, Cathy can represent clients with US immigration matters all over the US and world. She graduated from Chicago-Kent College of Law in 1999. Cathy Higgins-Mora is fluent in Spanish.

The Law Office of Cathy Higgins-Mora often hosts interns from high school on up. Interns get to experience what it is like to be an immigration lawyer at a small law firm. Interns get one on one shadowing opportunities with Cathy Higgins-Mora. Interns meet with clients, work with attorney and assistant to prepare cases and often serve as translators where possible (written and/or oral). In some situations, interns can attend immigration hearings and interviews with Ms. Higgins-Mora to observe and/or actively interpret for clients and immigration officials. Hours are quite flexible. Inquire by email if you are interested or want more information. 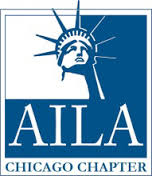 Not for Profit Immigration Advocacy Organizations

Cathy has been my lawyer for over 10 years and it has been a joy. She creates a safe space, is honest, resourceful, kind, helpful in any way she can be, and is your partner and support through any part of your journey. It was a true pleasure, and I am very grateful to have found her, I wouldn't be able to do it without her!
My family and I thank you. ❤

Dear Cathy,
We are very appreciative with all the help you have offered us. Thank you for guiding us through my husband's case because thanks to this and to God, my husband was accepted to enter the United States. All of us, including my family also are very happy with your work. I assure you that you will have good recommendations from us. Thank you so much again and may God bless you. You are a great attorney. My husband, my son and I will be so appreciative always; we appreciate you.

I had a very difficult immigration case (deportation) which few law offices could handle. Other law offices told me, "your case is loser." Finally I found Cathy Higgins-Mora. She is very nice, very helpful. I can't believe it how she helped me to win my case. I had been struggling with my status for five years, but she helped get my life back. I am very happy with Cathy Higgins-Mora, and I think she is one of the best as far as I know in Chicago. I highly recommend her.

My husband and I have been married for almost 10 years. We have been trying to fix my husband's immigration status for most of that time. There was nothing we could do until we could apply for the Unlawful Presence Waiver. Cathy Higgins-Mora walked us through the process of paperwork step by step. She made sure we knew what paperwork we needed to file and when it had to be mailed out. She is very organized and goes the extra mile for her clients. She was always available for me to call when we were working with her. If I left a message, she would call back promptly. She knows a lot about immigration law. It is because of her hard work and dedication that my husband now has his green card and can apply for citizenship in 3 years. I wholeheartedly recommend Cathy Higgins-Mora for all your immigration needs.

I was very fortunate to have Cathy as my lawyer. Cathy was one of the primary reasons the process of getting Green Card and then my Citizenship was so easy. A few of the more impressive things that I liked about Cathy were:

1. She listened to me and asked pointed questions to clarify exactly what I was looking to accomplish.
2. She gave her full attention while I was in her office.
3. I never felt rushed. She was always available to answer any questions.
4. She was thorough and extremely professional during our meetings to ensure I was comfortable and knowledgeable for my interview.
5. She anticipated the officer's questions and had me well prepared for them.
6. I was so well prepared for my USCIS interview, that it allowed me to feel relaxed during the entire process, which only took 10 minutes to complete.
7. Cathy is a very positive woman, which was important for me. I did not worry about my case at all. It seemed to me that everything was possible with her.

I would wholeheartedly hire her again. In fact, I will use her again to gain US citizenship for my parents!

Cathy Higgins-Mora is the immigration attorney who made my dreams come true. Words are not enough to describe my satisfaction with all the hard work she did to get me legal status here in the United States. Since I started filling out immigration paperwork she made everything easy to understand. If I had any questions she was always available for my doubts. I have been undocumented since I was 17 years old (now I am over 40 years old) and thought that I would not be able to get legal status in the United States. My case was very uncertain, but fortunately I got Cathy Higgins-Mora as my lawyer and she was able to help me get my green card. I am very happy with her work and am happy that I can apply for citizenship in 3 years. Thank you Cathy.

Thank you to Seeberg Photography. This photo was taken by Delia Seeberg, Seebergphotography.com

A first-time consultation may take well over an hour. We will do a complete interview of you and then discuss the issues, options and strategies for how to accomplish a solution for you. We will provide you with an estimate of legal fees to accomplish whatever option we decide to pursue. To cover the cost of the time involved in providing a detailed analysis of a case, we charge a $200.00 initial consultation fee. You will discuss your case directly with Cathy Higgins-Mora. Consultations can easily be done by phone or in person, whichever works best for you.

To set up a consultation or get more details, please fill out the form below.

There is plenty of free parking in the front of the building.

Calling our friends with DACA who reside in Illinois … ... See MoreSee Less

Monday started out badly when our Internet stopped working for a still unknown reason. Thankfully, my husband fixed it after the service provider could not. And my assistant, Yalixa, found all kinds of solutions to other issues. We are resilient! I am grateful! ... See MoreSee Less

Today I met with a client who I first met as a client 20 years ago! ... See MoreSee Less
View on Facebook
· Share